Color helps a movie tell its story. It shows a character’s journey. Both the lead characters in Raging Bull (RB) and Pi — Jake LaMotta played by Robert de Niro and Max Cohen played by Sean Gullette, respectively — are unbalanced, emotionally-destructive and eccentric. The use of black and white in these films help us see and feel their character’s mental, emotional and psychological state. Hence, black and white establishes or reinforces a biographical profile for a principal character. Using this, we can also, in a more pronounced manner, perceive Jake and Max’s feelings of imminent psychological disintegration in terms of cinematic time and space. 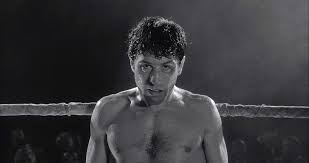 The absence of color in film is also an artistic and psychological convention of taking the viewers back in time. RB recounts the story of boxing champ LaMotta between the 1940s to the 1960s. Thus, black and white captures the mood of the period because it shows the way many people visualize that era and the movie also had fight footage inserts in it. The movie is entirely in monochrome, except for the opening billboard and the sequence of home movies shot in color. For additional trivia though, its director, Martin Scorsese has stated that he “decided to film it this way at least in part because fellow director Michael Powell, who happened to be viewing the initial (color) footage of de Niro as LaMotta, pointed out that the gloves the actor was wearing were the wrong color for the period.” (1)

Scorsese also used Eisensteinian visual collisions in editing. There was this sequence showing Jake and Vicki La Motta in their bedroom cut to a boxing scene between La Motta and Tony Janiro. The bedroom scene is quiet. No ambient sounds or mood music. The pace is slow and the lighting is low-key. But we feel like Jake is being jealous, making this a tense moment between the two. The mood is even more sinister. (see below) Then suddenly, it cuts to an extreme close-up of a boxer getting punched twice in the face, might be Janiro. And the cut is accurately timed with the first punch and we hear a rowdy crowd. We move jarringly from a slow to a fast pace, from peace to loudness, from stillness to motion and from restrained violence to clear-cut violence. As Eisenstein would have it, these two shots, when combined, create a new meaning altogether. 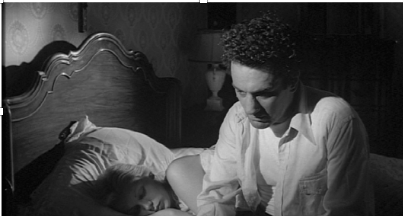 Violence is also showcased in both films. The fight scenes, both inside and outside the ring, in RB, involve blood. However, because it’s in monochrome, we are not distracted by its color especially if we see the boxers with a cut profusely bleeding in close-up during a fistfight. Trivia: Hershey’s chocolate sauce was used for blood in this movie. (2) Also, “sponges filled with fake blood were inserted into the boxing gloves, spraying the fighters and the ropes with amounts of fluid previously unseen in a sports movie.” (3) In Pi, however, Max burns the paper with the number and casually performs a trepanning on himself in the right cerebral hemisphere with a power drill. Therefore, black and white gives off a subdued tone in dealing with bloody scenes.

Hence, using black and white heightens the impact of RB and Pi’s violence. The lighting and contrast also enhances the brutality of the violent scenes especially if it comes across as film noir style. Additionally, monochrome helps express nostalgia as it links the time period and deepen the audience’s immersion in a movie’s historical context. In short, Raging Bull and Pi might not have had the same visual and emotional impact had they been seen in color.