Our short film “Ang Biyahe Ni Marlon” has been chosen to be part of the Viddsee Philippines online showcase. The film is eligible for the Audience Choice Award. Voting is from September 7 to September 21, 2018.

You can view our video here.
Our film page link: https://www.viddsee.com/video/marlons-journey/rcibg

It would mean the world to us if you show us your support by watching and clicking the “Heart” button on the tab below the video. Pusuan na natin ‘to, mga bes!

Truth be told, I’m still overwhelmed. Although it’s almost been a week, it feels like yesterday.

While I’m still trying to compose a decent letter to share my gratitude for the big blessing that came my way last Tuesday (it was Independence day, too!), let me just get the ball of gratitude rolling through this post.

My documentary short entitled, “Ang Biyahe Ni Marlon“, would have never been what it is without the bunch of kind and generous people in my life.

So here goes my big thanks to the following:

To Mariannel Crisostomo, Jonnie Lyn Dasalla, Clare Yee and Meika Catog for being ever supportive and encouraging in the making of the short film. To Meika, who has mentioned the festival in passing during one of our talks in a coffee shop, I’m glad, somehow, the info slipped your tongue because the Istorya ng Pag-asa Film Festival (INPFF) would have never reached my radar. With barely five weeks ’til the deadline, the thought of giving up never really crossed our minds. I’m glad we’ve always embraced positivity early on! Thank you, ladies!

To Ms. Hazel Alvero, Mr. Marlon Barnuevo and most especially, to Sir Marlon Fuentes, maraming maraming salamat po! Salamat sa tiwala at sa pagsuporta. You’ve been very generous with your knowledge and time, and that’s something I was never really expecting since I was, at that time, a stranger to all of you. 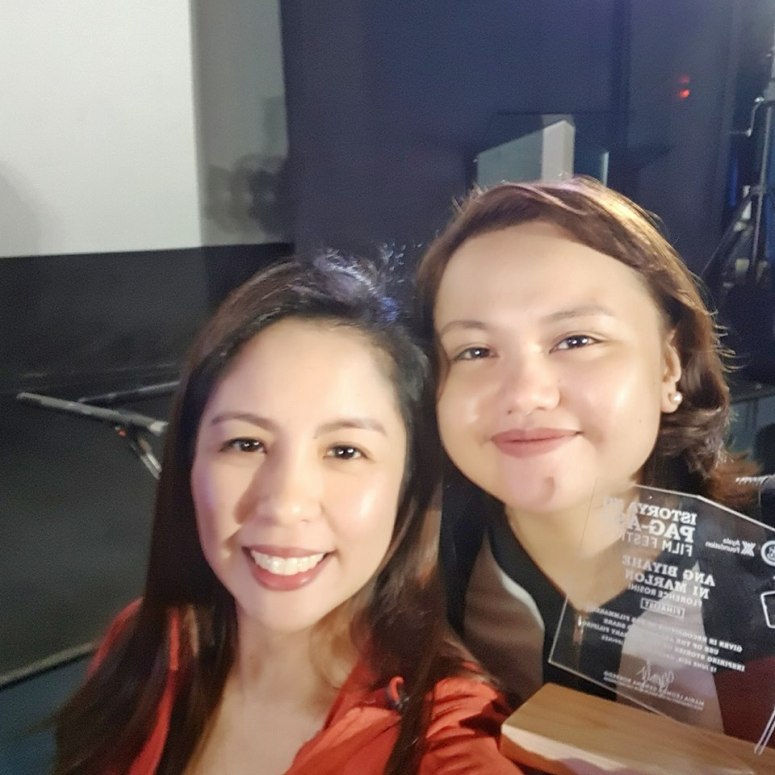 Ms. Hazel, it was you whose Facebook post I read, and you were very accommodating in answering my private messages. It was so easy to ignore them, and yet you took time to reply and from there, I got a hold of the contact number of Sir Marlon Barnuevo, who is the president of the Philippine Tourette Syndrome Association (PTSA).

Kay Sir Marlon Barnuevo, from the start, you’ve been very trusting of us, to the point of even welcoming us to your music studio in Quezon City. There, we learned so much about your advocacy, the PTSA, the association’s members and their struggles and victories. And it was you who connected us to Kuya Marlon Fuentes.

I will always be grateful for Ma’am Ludz Labagnoy, my former professor in Pamantasan ng Lungsod ng Maynila, who’s a good friend of mine now. Ma’am, matagal na natin itong pinangarap. I’m lucky I got to share this blessing with you.

I know I’ve said this many times. But thank you to the Office of the Vice President for spearheading this campaign! Maraming salamat, her excellency, VP Leni Robredo. Thank you to Ayala Foundation. To Cindy and Korinne, big thanks for your warm welcome.

Thanks din kay Ran Perez for designing the official poster.

Our film will be screened in Ayala cinemas starting this Wednesday. 🙂

Ang Biyahe Ni Marlon is our official entry to the first-ever Istorya ng Pag-Asa Film Festival organized by the Office of the Vice President and Ayala Foundation.

This is a documentary short featuring Marlon Fuentes, a driver with Tourette Syndrome (T.S). Instead of being discouraged by people who look down on his condition, Marlon is motivated to continue working to support his family and to serve as an inspiration to the people who have T.S. This film aims to raise awareness about Tourette Syndrome in the Philippines. It’s a movie sponsored by TOSS Travel and Tours.

Below is our teaser poster! This is made by my friend, Ran Perez, who is a brilliant graphic designer! I’m excited to share this with all of you. It’s going to have its premiere on June 12 at Glorietta Cinema. I’ll keep you guys posted! 🙂

Okay, okay, aminin ko na. I’ve been waiting for the announcement since May 1. :)) The finalists were supposed to be announced on Labor day but according to their official Facebook page, the selection team had to move it on May 4 due “to the huge volume of entries sent their way.”

Three days later, on May 4, at 10 pm, I read through Facebook that our film was chosen as one of the finalists in the first-ever Istorya ng Pag-Asa Film Festival! (INPFF). It’s unbelievable! It was mindblowing. I’ve never been a ‘suki’ of film festivals. Honestly, I don’t like the idea of joining for the sake of competition. But this one’s different. I had this burning desire to join because I wanted everyone to know the utterly inspiring story of our subject. I also believed in the vision of the film festival, which is to showcase inspiring stories of hope. This was an advocacy I couldn’t afford to miss.

Our docu short is entitled “Byahe Ni Marlon”, it’s about Marlon Fuentes, the Uber driver who went viral on January this year. It was because of his condition called Tourette Syndrome (T.S). A passenger named Hazel Alvero took a photo of the cardboard sign displayed inside his car which stated his condition. Sir Marlon did this so that passengers won’t be worried the moment they step inside his car and see him ‘acting weird’ or ‘twitching’ while driving. Some even thought he was on drugs when they saw him, especially those who were quick to judge and unaware of T.S.

When I read about his story, I was moved. And I was sure everyone who would come across it would experience the same. So I decided to join and submit our docu short. As an amateur filmmaker, this was sort of a baptism of fire. 🙂 I’ve never directed and produced my own film before. Difficult days were faced. Many moments of exhaustion were endured. But instead of losing hope or giving up, I knew this had to push through because we had this moving story to tell. I know it’s going to be worth it. For me, it’s not about winning the competition. It’s about telling this story so that people will get inspired, so we can spread good vibes and positivity all around. We all need that in these times. And I’m glad we took that leap!

With only a few weeks left before the deadline, we rushed to complete the project. We barely had a month to pull all these off. But I guess the Universe conspired to make things fall into place because we managed to interview and film the people involved in this story within the timeframe. That’s also one of the reasons why I’m very motivated to finish this project no matter what happened. And I’m so lucky that I get to meet these bunch of individuals who are all generous and trusting of us. Thank you to Sir Marlon, his family and friends. Thank you to Mr. Marlon Barnuevo and the Philippine Tourette Syndrome Association. Thank you to Ms. Hazel Alvero.

I’m glad that I had passionate people with me who believed in that vision. Thank you to my production team! Meika, Clare, Jonnie, and Nel. Thank you Sandro and JJ for the last minute help. Thanks, too, Bennel. Thank you to Ma’am Ludz Labagnoy for the endless guidance and support. Thanks also to our sponsor TOSS Travel and Tours.

I am yet to receive an email from the INPFF for further instructions but I’m already delighted with the fact that Sir Marlon’s story reached them, no less than the Ayala Foundation and the Office of the Vice President. So thank you, too, AFI and OVP for opening an avenue for this kind of cinematic storytelling!  Here’s hoping that more people will get to see our film so that we can spread awareness and understanding about Tourette Syndrome and the PTSA. Here’s also hoping that more people will get to see it because we need inspiring stories of positivity in our lives. 🙂  Will update soon! To God be the glory!