Last month, I was delighted to know that I’m part of the Hidden Cinema exhibit curated by no less than the multitalented filmmaker and film historian, Nick Deocampo. The Ayala Museum is kind and generous enough to devote a space for alternative filmmakers like us! Aww. Thank you so much! Also to the Filipinas Heritage library and to other sponsors like CNN Philippines, Samsung and Center for New Cinema, big thank yous!

The installation features mostly alternative Filipino filmmakers. From big names such as Cannes Film Festival winner, Raymond Red and Berlin Film Festival awardee, Kidlat Tahimik. And then to a nobody like Florence Rosini.

That’s why I’m deeply honored to have been chosen as one of the filmmakers that make up the first cycle of the exhibit, also dubbed as CineRhizome. To be alongside these distinguished luminaries is a very mindblowing experience! Of course, I don’t want to take all the credit. Everybody from our team made a huge effort to put it altogether. For us to be featured, all it took was an online submission of a one minute excerpt of our film called ‘Ang Biyahe Ni Marlon.’ And then we left it all to… fate. That was July 6.

Last Monday, August 13, was the Hidden Cinema Congress, and later that day, we formally welcomed the second wave of filmmakers that made up “Cycle 2.”

I thought the event was only for established filmmakers who would discuss their filmmaking experiences  to us amateurs. And it was… but it was waaay more than that. Because it was an avenue for a healthy and insightful discussion of the Philippine Alternative Cinema movement.

I keep on saying Alternative or Alt, but what is it anyway? Sir Nick defined this as:

“espousing or reflecting values different from those of the establishment or of mainstream culture”. See photo below.

Sir Nick said that the last time a Congress of such intention was held in the 80s! Wow, 30+ years ago!! From then on, nada. So with this initiative, Sir Nick and his friends gathered everyone for an afternoon to start a dialogue about the current situation of Alt cinema in the Philippines. Alternative cinema includes but are not limited to: student films, short films, advocacy cinema, experimental films, among others.

The independent cinema or alternative cinema in the country has been on the rise in the last thirty years because of the popularity of digital filmmaking, which is accessible to the youth, and the millenials. It’s evident in the proliferation of student films that join festivals and those short films that circulate online. Alt Filmmakers (and boy, were there many of us in in the ground floor of the Museum) made a declaration that day: to continue making alternative films and support the Movement.

It was overwhelming for me. I didn’t think that was going to be a monumental day for alternative cinema in the Philippines! And I was there to witness it. Also present were members of the academe, teachers and students who are film enthusiasts and film lovers, aside from the filmmakers and film historians.

What made this historical? First, the Congress coincided with the centennial celebration of Philippine cinema. Second, we formalized the Movement by gathering everyone through the Congress. We called it the Philippine Alternative Cinema Movement. We defined it, as shown above. Third, we had an open forum where we discussed our action plans, even as welcoming suggestions of institutionalizing the Movement! Thanks to the encouragement of Sir Nick, the support of the community and the assistance of government instutions like NCCA, FDCP and CHED. 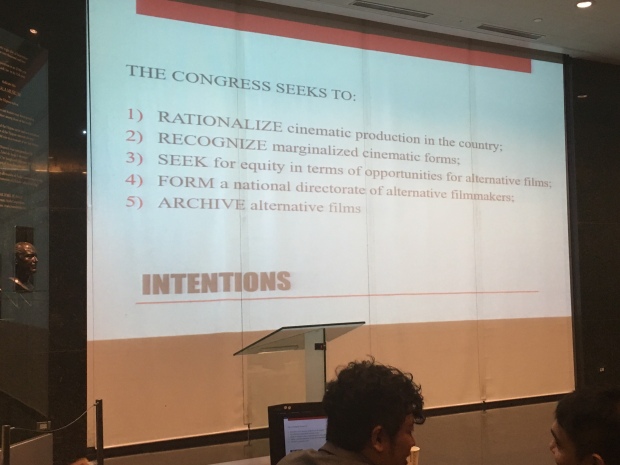 Indeed, I’m sure there will be more reasons to celebrate aside the the Centennial mark of Philippine cinema. And I’m glad to watch history unfold right before my eyes!

Thank you so much to the organizers and the speakers of the Hidden Cinema Congress for creating a space for dialogue and encouraging alternative filmmakers to continue on making waves and movie-making! Salamat po sa inyong lahat!